Thrill-seekers and historians alike understand the allure of the Russian city of Chernobyl. However, the event that made this site famous renders it fundamentally risky for visitors.

It’s important to examine many factors regarding the safety of Chernobyl before planning a visit. In 1986, a chain reaction meltdown caused one of the worst nuclear disasters in history. Fires and a radioactive cloud spread for 10 consecutive days.

The remaining radioactivity makes the question of Chernobyl’s safety unclear. Visiting Chernobyl is now possible. However, several safety precautions are needed to preserve the highest level of safety.

Below is a quick introduction to travel tips and safety concerns for a trip to the historical site and extreme dark tourism destination of Chernobyl.

Is Chernobyl Safe to Visit Now? According to the New York Times, radiation levels at the Chernobyl site are within a healthy range. Nearly 40 years after the disaster, visitors can visit Chernobyl if permitting and safety restrictions are closely followed.

The most dangerous threat when visiting Chernobyl is the potential for radiation sickness. While the risk of exposure is within acceptable levels, the risk never completely disappears.

Getting cut by a broken window or falling into a hole in the street left behind by a stolen manhole cover represents a constant danger while touring Chernobyl.

Ongoing military conflict in the region represents the second largest threat to safe travel to Chernobyl. In early 2022, Chernobyl served as the site of a battle during the conflict between Russia and Ukraine.

The location of Chernobyl represents disputed territory between Ukraine, Russia, and Belarus. This continuing warfare makes Chernobyl a risky place to visit based on the dynamics within the current geopolitical climate.

Unlike many other potentially risky locations, crime in Chernobyl presents less of a problem. Crime in Chernobyl barely registers compared to the inherent danger surrounding visitors to an abandoned nuclear disaster site.

However, some forms of crime still plague the area of Chernobyl. Before 2000, no one but Chernobyl guards and employees was allowed to live inside the nearly 20-mile square area called the Exclusion Zone.

As village elders returned to their home of Chernobyl, eventually officials relented and unofficially allowed the elderly to live within the abandoned city limits.

The average age of the fewer than 200 residents of Chernobyl is 63. Young adults and children remain banned from living in Chernobyl. In addition to semi-legal residency for senior citizens, a few other crimes pop up in the Chernobyl area.

Poaching and illegal transport of goods within Chernobyl represent an even more frequent issue. The Exclusion Zone within the city welcomes very limited human activity.

The Chernobyl disaster required more than 200,000 people to permanently relocate. The frenzied evacuation meant all valuables and belongings remained behind, especially those of wealthy residents.

Looters attempt to steal television sets, artwork, and other potentially contaminated valuables. Reinforced police units and increased criminal penalties since 2007 attempted to crack down on looting.

No updated data is readily available to illustrate the crime statistics of Chernobyl. This fact implies the risk of being a victim of crime during a visit to Chernobyl is very low. The best way to avoid risky areas in Chernobyl and parts with high crime is to stick with a tour group.

While individuals can visit Chernobyl alone, it’s easiest and safest to book an official tour of the Exclusion Zone. Guided tours make sure visitors never stray into dangerous territory and provide spectacular historical context to what you are seeing. 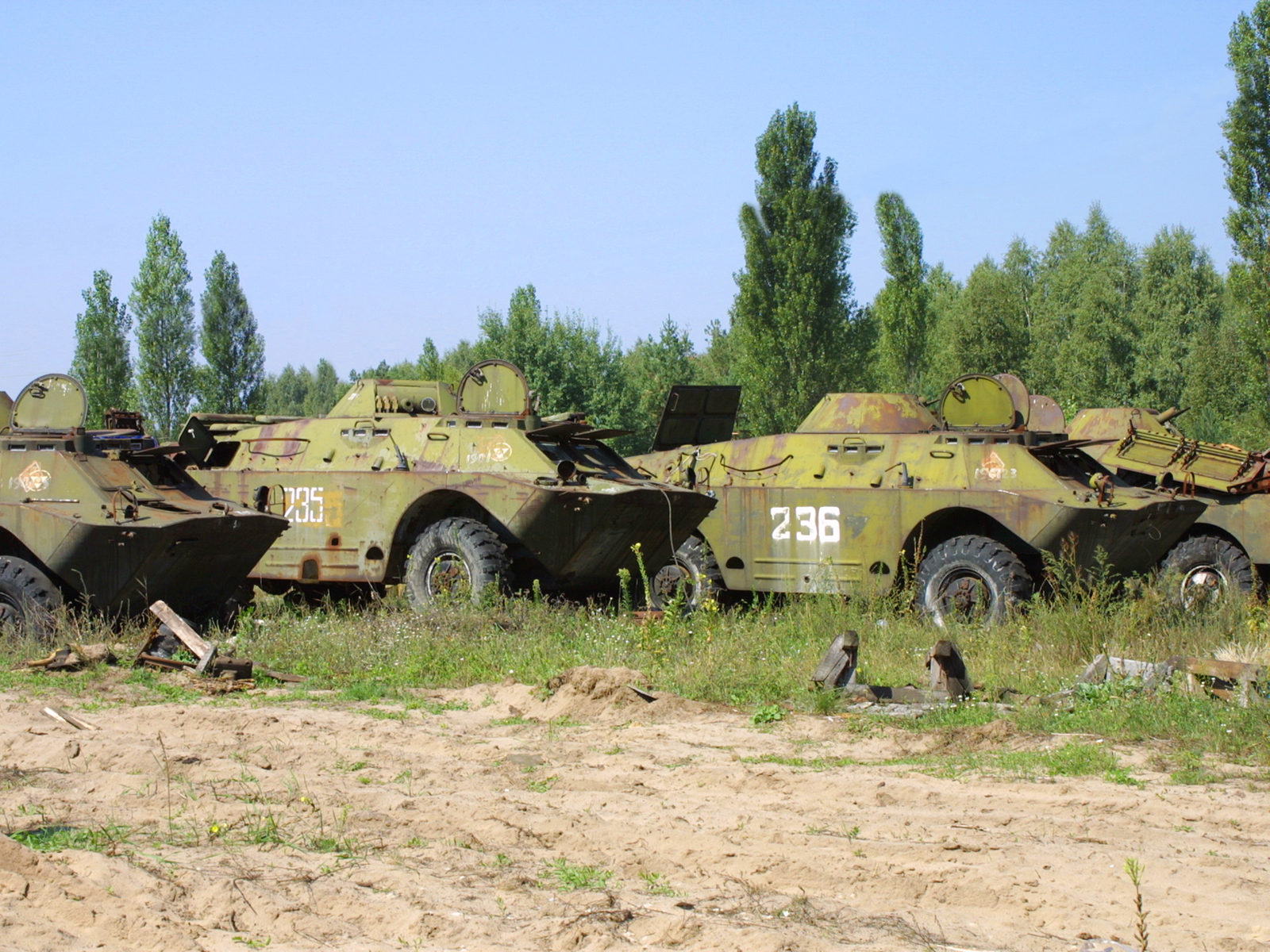 Stretching about 20 miles in every direction, the Chernobyl Exclusion Zone represents a land mass nearly the same size as the U.S. state of Rhode Island. Within the Exclusion Zone is another, even more restricted area within Chernobyl.

A six-mile square area represents the most dangerous levels of radiation in the city. No tours reach this zone, which requires a high safety clearance to enter. In addition to the tight inner Exclusion Zone, individual hot spots pop up within Chernobyl and its surrounding villages.

The iconic abandoned amusement park and Chernobyl’s Red Forest are famous hot spots. As previously mentioned, the best way to avoid bad neighborhoods within Chernobyl is by always staying with your designated tour group.

Certified guides deliver the most updated information and training about navigating this unique and risky landscape. Never stray from the tour guide, sit on the ground, or lean on objects within Chernobyl to avoid unnecessary danger.

After finishing your Chernobyl tour, wash your hands thoroughly and complete any necessary scans.

Often a full-body radiation reading machine and Geiger counters will be used to monitor your radioactivity level. Pass through every official checkpoint to exit Chernobyl to ensure the safest possible re-entry.

Considering the radiation risk remains essential throughout your visit to Chernobyl. While many other tourist attractions don’t dictate a lot of your behavior, this historical site enforces strict rules.

No alcohol, weapons, or drugs is allowed at the Chernobyl site. Also, visitors are not allowed to sit on the ground because of the increased radiation risk in the soil.

Leaning on buildings or cars or touching any abandoned relics isn’t recommended. Wash your hands frequently and as soon as you leave the Chernobyl site.

Avoid touching your eyes or putting your hands into your mouth for an extra layer of safety in a radioactive environment. Only eat or drink while in an enclosed, indoor area. Visit the retro canteen still serving European-inspired dishes for visitors and Chernobyl staff alike.

Because of the continued volatility of the Chernobyl area, tourists must clear several levels of bureaucracy to visit the site. First, visitors must apply for a permit to enter the Exclusion Zone.

Processing of this application takes at least 10 days, so don’t forget to plan if you wish to visit this dark tourism destination. Once you have a permit, visitors to Chernobyl must book either a licensed group tour or purchase a private tour.

Tours within Chernobyl can take one day to several days. A one-day tour remains the most popular option. For about $100, tourists can experience a 12-hour excursion within one of the most radioactive places on Earth.

Visitors must prepay for the tour. Make sure you are prepared to be away for a half-day. Bring water, comfortable shoes, layered clothing, sunscreen, and snacks to keep you safe and healthy during this long tour.

For an extended, and riskier, experience, book Chernobyl tours for two or three days, up to a five-day or seven-day dark tourism adventure.

Private tours are more expensive but provide a higher standard of safety as well as more detailed commentary. Individuals can book a single ticket but must be part of a larger group or a private tour.

Travelers without a booked tour or permit will not be allowed into the Exclusion Zone. Don’t forget to bring your passport as this ID will be analyzed during the many checkpoints. Chernobyl dress code recommends visitors cover as much of their body as possible. Long sleeves, pants, and closed-toe shoes provide the best wardrobe for this tour.

This handheld monitor continuously records the radiation level around you and compiles your comprehensive dose of radiation at the end of your trip.

Buying this simple tool helps you better contextualize the unique environment you are touring. Some people are not allowed to tour Chernobyl for their safety. Pregnant people cannot visit the site because of the health risks.

Those with chronic health issues also expose themselves to unnecessary danger when touring Chernobyl. Their attendance isn’t recommended.

All visitors to this historical site must be 18 years old or older. Children are not allowed to visit Chernobyl. Passports are checked regularly to maintain these safety standards.

In addition to usual safety concerns, Chernobyl lies within the disputed, desirable territory between Belarus, Ukraine, and Russia. Throughout the early decades of the 21st century, skirmishes erupted near and within Chernobyl.

In 2022, Russian and Ukrainian forces traded occupation of the Chernobyl site during the Russian invasion of Ukraine. The strategic location, valuable resources, and dangerous conditions of Chernobyl make this location more than a tourist attraction.

Some reports of radioactive dust stirred by military vehicles leads some to claim the Red Forest area, a popular part of the Chernobyl tours is now more dangerous than before.

Tours continue to run to Chernobyl, even within active military conflict. However, this part of the world frequently experiences conflict.

Waiting for peace and stability within this part of the world may take a long time. This added layer of volatility should prompt serious consideration from contemporary tourists. Before planning a trip to Chernobyl, don’t forget: Deepen the conversation about Chernobyl’s safety with these common questions:

While the reactor works once again, the ruined reactor remains covered by a dome since 2016. Based on lessons learned from the Chernobyl disaster, a similar kind of meltdown is now nearly impossible.

Can humans live in Chernobyl?

Officials finally relented to allowing elderly residents of Chernobyl to return to their homeland after almost 15 years of forced relocation. To this day, only about 200 senior citizens live within Chernobyl’s Exclusion Zone. Young adults and children are not allowed to live in Chernobyl.

What is the most radioactive place on Earth?

Are there animals in Chernobyl?

Yes! Areas of Chernobyl have returned to their natural state after decades of human inactivity. This means wildlife flourishes within the Exclusion Zone, including lynx, wolves, dogs, and the distinct Przewalski’s horses of Chernobyl.

Can you go inside the Chernobyl power plant?

Some tours include a visit inside the power plant, including Control Room #4 where the meltdown began. Seeing the original Observation Deck provides a close connection to this tragic moment in history.

How long can you survive in Chernobyl?

The varying levels of radioactivity around Chernobyl provide an unclear picture of the land’s danger. Scientists vary widely on the life span of potential long-term residents of Chernobyl. Some claim permanent residents could live only 20 years within the Exclusion Zone, while others claim residents would be safe for generations.

What is the elephant’s foot in Chernobyl?

The elephant’s foot refers to the mass of radioactive material indicating the meltdown of the reactor. This hunk of sand, metal, nuclear fuel, and concrete forms an extremely dangerous lump still fused to the ruined core.

So, Is Chernobyl Safe to Visit?

Chernobyl remains a radioactive site but is considered safe for supervised, restricted tourism. Additional personal research and permits are required to visit Chernobyl. A guided tour of the site is recommended to maintain the highest standards of safety. Happy travels!